Predicting the binding affinities of small molecules and proteins is of great importance in attempts to use existing drugs for new purposes. Due to the various unfortunate issues that have vastly increased both the costs and time to market of new drugs, repurposing of existing drugs has many advantages.

Multiheaded input CNNs have been used in these regression problems in which the drug (small molecule) and protein are input separately, usually as SMILES strings and character based amino acid sequences respectively, passed through convolutional blocks, merged, then passed through dense layers. Here, the authors, replace SMILES strings with various graph convolutional layers. In this method, molecules are represented as mathematical graphs:

An edge is set to a pair of atoms if there exists a bond between them. As a result, an indirect, binary graph with attributed nodes is built for each input SMILES string. 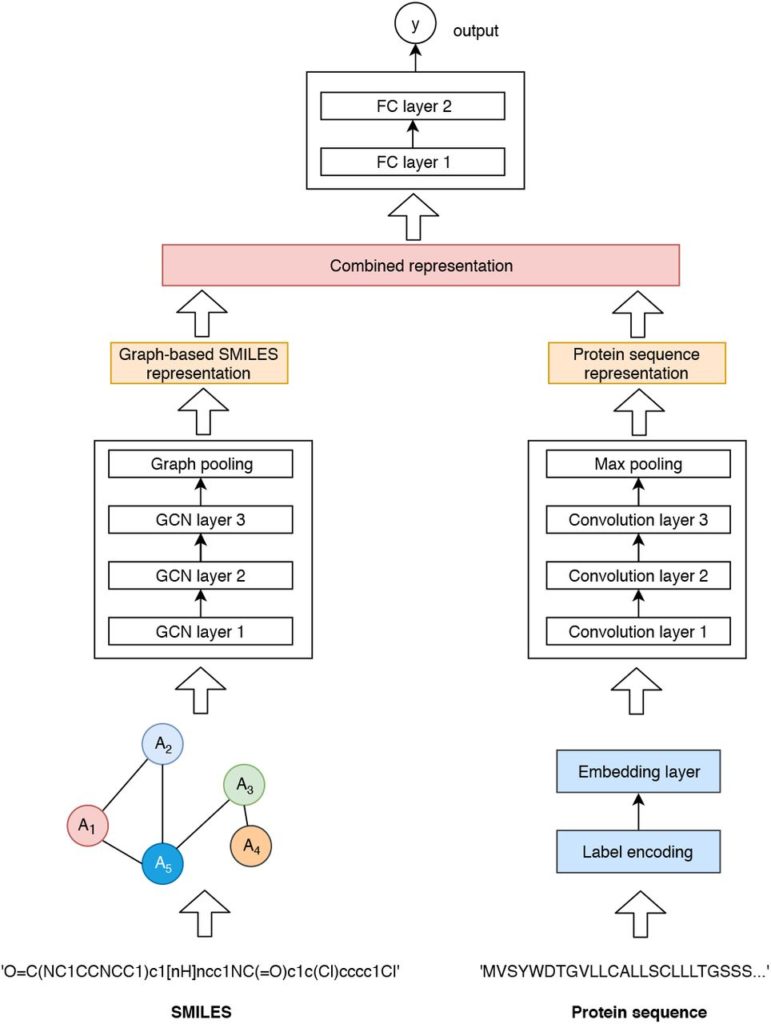 The authors conclude that:

GraphDTA can not only predict the affinity of drugs-targets better than non-deep learning models, but also outperform competing deep learning methods. In particular, GraphDTA performs consistently well across two separate benchmark databases in all the evaluation measures. The result suggests that representing molecules as graphs can improve the performance considerably. Also, it confirms that deep learning models are appropriate for drug-target binding affinity problems.

Code can be found at https://github.com/thinng/GraphDTA.

The abstract of Prediction of drug-target binding affinity using graph neural networks is shown below.

Background While the development of new drugs is costly, time consuming, and often accompanied with safety issues, drug repurposing, where old drugs with established safety are used for medical conditions other than originally developed, is an attractive alternative. Then, how the old drugs work on new targets becomes a crucial part of drug repurposing and gains much of interest. Several statistical and machine learning models have been proposed to estimate drug–target binding affinity and deep learning approaches have been shown to be among state-of-the-art methods. However, drugs and targets in these models have been commonly represented in 1D strings, regardless the fact that molecules are by nature formed by the chemical bonding of atoms.

Method In this work, we propose GraphDTA to capture the structural information of drugs, possibly enhancing the predictive power of the affinity. In particular, unlike competing methods, drugs are represented as graphs and graph convolutional networks are used to learn drug–target binding affinity. We trial our method on two benchmark datasets of drug–target binding affinity and compare the performance with state-of-the-art models in the research field.

Results The results show that our proposed method can not only predict the affinity better than non-deep learning models, but also outperform competing deep learning approaches. This demonstrates the practical advantages of graph-based representation for molecules in providing accurate prediction of drug–target binding affinity. The application may also include any recommendation systems where either or both of the user- and product-like sides can be represented in graphs.

At no cost to you, Machine Learning Applied earns a commission from qualified purchases when you click on the links below.